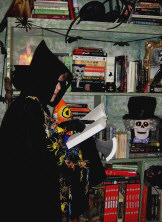 "Welcome to Count Gore De Vol's Tomb of Dark Delights.   I'm J. L. Comeau, horror writer and resident Tomb Keeper.  I have been charged with the daunting task of sorting and cataloging the Count's vast library of horror, science fiction and fantasy.  Take a torch from the wall and follow me down the stone stairway into the darkness deep beneath the Dungeon.  It's cold and damp down here--perfect for the kind of reading we're going to do.  Never mind the shambling figures in the shadows, they're probably just some friends of ours looking for a good book. If you click on the cover, you'll be taken to a wonderful place where you can buy the book.
Now, let's reach into the musty stacks and see what we can find..."

(Clicking on the covers gives you more information and prices from Amazon.com and other outlets.)

Who’s in the mood for some great science fiction from women authors? Me for sure! Let’s do this!

THE DEATH HOUSE by Sarah Pinborough

Although this is being marketed toward a young adult audience, I agree with Stephen King, who says of THE DEATH HOUSE, “…moving and involving, I could not put it down”. This is a marvelously creepy and engaging novel set in a dystopian future in which a group of youngsters have been removed from society and placed into a sort of asylum because a certain marker has been found in their blood. The asylum is called “The Death House”, where the inmates are studied and watched closely for any sign of impending illness associated with their blood tests. When young Toby takes the proscribed blood test at school, he has no idea that he will soon to taken away from everyone and everything he knows and placed into an institution from which he will never emerge. His days are unending tedium because he his someone, among many others, for whom society has no use. All he knows that when he begins to exhibit symptoms of the mysterious illness his blood tests have confirmed, he will be sent upstairs to the Sanitorium to die. Lost and having given up all hope, a new girl named Clara comes into his life. Clara does not accept her fate, as Toby and the others have done, and she pledges to make the most of what life she has, showing Toby that there are choices in life…and in death. Skillfully wrought and deeply moving, Sarah Pinborough creates a world of sadness that offers hope.

KOKO THE MIGHTY by Kieran Shea

If you missed the first installment of Kieran Shea’s kickass Koko series, KOKO TAKES A HOLIDAY, I urge you to get a copy while awaiting this preorder due to be published by Titan Books on August 25! It’s the 26th century, and former corporate mercenary ass-kicker Koko Marstellar and her erstwhile lover and ex-orbital skycop Jedidiah Flynn are trying their best to make their lives work by attempting to run a combo saloon/whorehouse located within the world’s most licentious and violent, um, resort town. But Koko has a bounty on her head (see KOKO TAKES A HOLIDAY, and when bounty hunter Jackie Wire tracks her down, Koko and Jedidiah are on the run again, this time sailing across the Pacific Ocean at breakneck speed toward a destination they are sure is uninhabitable, but…nope. Trouble is waiting for them. Fear not. Koko and Jedidiah are ready for anything, and readers of KOKO THE MIGHTY should be ready for anything, too. Fast-paced, wise-ass, crackling with action and snark, this is a science fiction adventure with style and brio.

Who’s looking for some thrills and chills? Me, me, me! Check out these titles that are perfect for spring reading!

Agent and novelist Keith Korman has crafted an epic (524 pages!) novel of apocalyptic intrigue and dystopian science fiction. When a secret government biological experiment goes horribly awry, unexplained kidnappings of young women begin to occur with horrifying frequency. And that’s just the beginning. Virulent viruses are loose, causing some people to go rabidly insane, but causing others to become mind-readers. It seems that the entire planet is going mad, imploding upon itself, and something must be done. Finally, three people are summoned and tasked with an investigation that will either save or doom the world. Three people: L.A. cop Cheryl Gibson, a Lakota Sioux with supernatural gifts, Billy Howahkan, and astro-scientist Bhakti Singh, undertake a road trip across the blasted hellscape of America to track down a pair of children with astonishing powers. If the trio cannot locate the two young people who seem to form the locus and potential end of the current disaster, humanity will not survive. This is a big, tight, beautifully written and structured novel reminiscent of the much-missed mega-disaster novels of the 1970s.

Not since Flash Gordon took on Ming the Merciless has gonzo science fiction been this much fun. Check it out: Carter Sloan, bioengineered super-operative/assassin has been deep in cryogenic slumber for 258 years. When awakened from stasis by the ruling government, Sloan is, well, not happy. The ruling government turns out to be Nazis, and the Agency wants Sloan to track down an enemy of the galactic Reich, the daughter of the powerful Brass Dragon. As Sloan boards the Mars-bound imperial frigate, the Rommel, which is waiting for him in deep orbit, he reflects that he “has not been laid in a millennium”. That is a situation that Sloan resolves in short order, in many instances, and in a number of configurations as the novel proceeds. Armed with a blaster and a bad attitude, Sloan swaggers across the universe with blaster in his hand, women on his arm, a bad-mouthing ass-kicker who never met an enemy he didn’t obliterate. These are the very adult adventures of an irreverent action anti-hero whose derring-do will keep you in stitches.

To get even more information about these titles, including some of the best prices on the Internet, just click on each of the book covers and you'll be connected to

About the Tomb Keeper (Or, who is this person of mystery)

J. L. (Judy) Comeau is an award winning short story writer whose work has appeared internationally in major horror and dark fantasy anthologies such as the Borderlands series, Best New Horror, The Years' Best Horror, the Hot Blood series, and the Dark Voices series in the UK.  She is an active member of the Horror Writer's Association, and she lives in the Washington, DC area where she also teaches short story writing. Click on FIREBIRD to read one of her most anthologized stories.

To learn more about the Horror Writer's Association, just click on their logo!